Look around 10-year-old Julia Tang’s house and you’ll see dozens of her pencil drawings on the walls — a menagerie of animals, fruits and treasured objects. Listen and you’ll hear her playing spirited music on the piano in her parents’ living room. Ask young Julia about what her favorite subject at school, and she doesn’t hesitate.

“Science,” she says. “I just made an edible cell out of a watermelon shell; the cytoplasm was orange jell-o. I used a grape for the nucleus, beans for mitochondria, an orange for a vacuole and green beans for chloroplasts. And, oh yeah, the watermelon pulp was the cell membrane.” 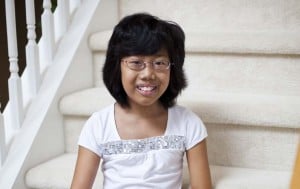 What does it take to excel at art, music and science? Hard work and energy — something that Julia’s mother, Maple, says her daughter has in abundance.

“She’s the most energetic member of her family,” Maple explains, laughing as she watches Julia chase her sister and their cat up the stairs. “We say her heart is stronger than ours. She’s got an athlete’s heart.”

Julia’s endless energy is relatively new — especially compared to years past. She was diagnosed with thalassemia when she was just nine months old. Immediately after the diagnosis, Julia’s parents took her to another part of the hospital, where she had her first blood transfusion.

“We were in the hospital with her overnight,” Maple says. “The transfusion was very, very slow.”

Since that day, Maple and her husband have worked tirelessly to help their daughter. With Julia taking medication every day and going back at the hospital for blood transfusions every few weeks, they searched for a cure. They stayed in regular contact with the Cooley’s Anemia Foundation to get helpful advice, information and resources that’d help Julia stay healthy. And then, in June 2010, Julia’s parents learned about a medical possibility that was just what they’d been looking for. 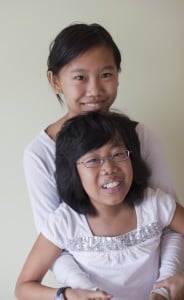 Julia and her sister

“We talked with a doctor in St. Louis, Missouri about an experimental bone marrow transplant,” Maple explains. “We’d always known that a transplant was the best chance of a cure, but it was risky in the past. We were told that this new experimental transplant was less risky.”  (Julia underwent an unrelated donor transplant; for more about this process, see the article on the facing page.)

So, in November — after finding donor matches through a Red Cross database — Julia had the transplant. She spent six weeks at the hospital, including 10 days of chemotherapy. Julia was able to keep up with her school assignments and studies through regular visits from a teacher.

She received one last blood transfusion in December, and hasn’t needed one since then. Julia’s parents say her hemoglobin levels are normal now — which means that, after the transplant, she’s thalassemia-free.

“This kind of transplant can save our children’s lives,” Maple says. “It’s been a year since the transplant, and everything has changed for the better. It was a long battle looking for the cure but, hopefully, our success story will be encouraging to families like ours.”

And there’s something else that’s very encouraging about Julia’s story.

“You know she loves science,” Maple explains. “Now she wants to be a doctor. In all the time she’s spent in hospitals throughout her life, she’s seen how they take care of others and is amazed by it.”

But that’s still many years away for young Julia. For now — between art, music, science and the business of being a kid — she has plenty to fill her busy days and keep her learning. And now she has the energy to do whatever she wants, including pursuing new interests.

“Julia’s sister is on her school’s swim team,” Maple says.

“When can I do that?” Julia asks, ready to dive into the next big thing. 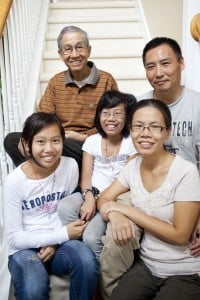 Patients in the News